My experiences in the Philippines

Hello! This is probably going to be one of my last posts, since I’ve officially ended my internship.
Like I mentioned last time, we took a day trip to a GK community in Manila. The community was called GK Escoba. It’s a less developed community and they are still working on building houses. So, a big group of interns from GK Enchanted Farm and some groups from schools around Manila spent this GK Friday (GK Fridays are days spent volunteering at various GK communities) helping to build houses for this growing community. This involved digging and breaking up rocks in order to have bases for the houses. Afterwards, we filled bags and buckets with the rock and dirt and a line of volunteers passed down these buckets and bags to a place where we could dump the rocks. The sense of community was fantastic, since every single volunteer and some of the community members worked together in this line to pass buckets. We got a home cooked meal at the community for lunch before continuing to work. I also got a chance to meet a few of the community members and the kids. What I enjoyed the most about that is that everyone was so positive and happy about the progress of their community and the help they were getting from us. After everyone at the community waved goodbye to us, we headed back to the farm and many of the interns spent time together at the pool after a day of hard work. That night, almost the whole group of interns (which is very difficult to plan) went to dinner together at an amazing Filipino restaurant. It was great to spend time as a group and enjoy some time together before everyone leaves. 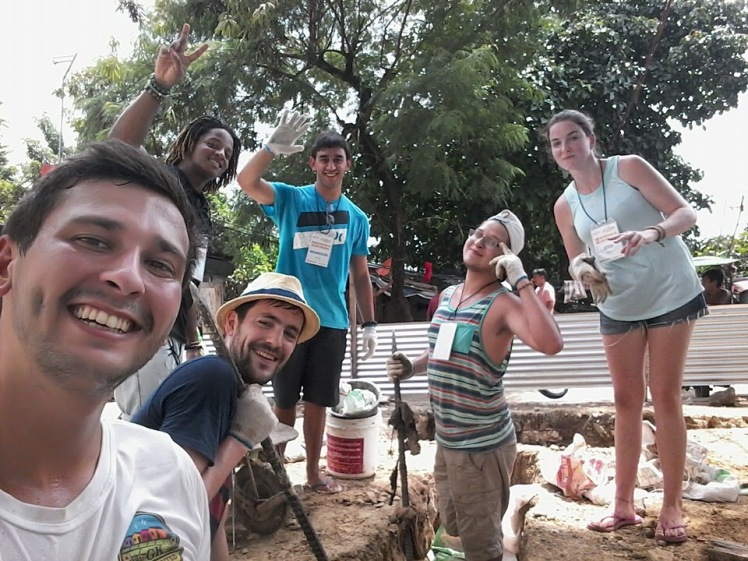 Since the current guy in charge of chickens is going back to France to finish his degree and a new intern is taking over the chicken farm, we agreed to help him with a chicken slaughter on Thursday morning. Although I’d helped at a chicken slaughter before, this was my first time seeing the whole process and holding a chicken while it was actually getting slaughtered. I was there for the whole process – from live chicken, to wrapped chicken like you’d see it at the grocery store. While it was sad to watch the slaughter, I think it is a good thing to see exactly where your meals are coming from, especially since this is the chicken we are served at the farm everyday. Also, the guy currently in charge of chickens made a good point by saying that being involved in a slaughter shows you just how much power you have over them and many other animals. This was also something I’d never considered. This whole time at the farm, and especially the slaughters have definitely made me consider where my foods is coming from and think about what kinds of meats I’m eating.

On Sunday morning, Nate and I were asked to help out with a community event. Every month, the community schools have a theme, and July was nutrition month. So, as a celebration of nutrition month we had a parade. All the kids dressed up as healthy foods and we paraded down the farm with posters of healthy food choices. Afterwards, Nate and I worked as the jury for a costume contest, a drawing contest for the older kids and a coloring contest for the younger kids, and a healthiest child contest (based on a presentation about food they gave). Everyone was very energetic and it was good to see the kids learning about healthy foods. One thing I’ve noticed helping out at the school is that all the kids bring very unhealthy snacks. Common foods include brownies, chips, cookies as well as sugary juices and drinks. For this reason, I think the nutrition education was important for the students and parents alike. At the end of the event we had a boodle fight with the kids and the parents, as well as anyone else involved in the event. It was another great community bonding event. 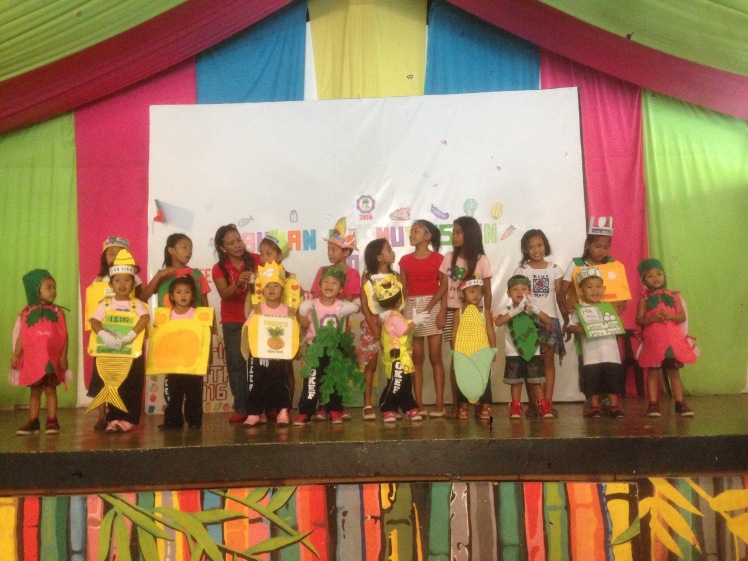 Morgan and Suchana took over the turkey farm, so I helped them a few times. For example, the fence of the turkey farm was broken, so I helped cut down bamboo with machetes which was later used to build a new fence. I also helped them make a big, unexpected order of turkey burgers another night and helped prepare another order for a big group of visitors. It was cool to see the turkey farm going from being completely neglected to us grilling an order of 30 burgers a few weeks later.

On Sunday night, all of us IWU students hosted a despedida (or farewell) party at a resort about 15 minutes from GK. All the interns and some of the other people from the farm got together to eat, drink, swim, dance and sing with us before we left. It was a really fun night (even though the power went out pretty early and we were stuck in the dark)! However, during the time we were gone someone broke into Suchana and my room and stole both our laptops, our bags, my iPad, Suchana’s wallet and a few other things. So, we spent the whole next day and many hours that week at the police station and talking to various people in charge at GK. What I learned is that the whole relaxed Filipino lifestyle definitely also carries over to the police force. It took us many frustrating attempts to finally get a police report written and signed, and many people told us they’d “get back to us soon” often. While I’m clearly not happy about my things getting stolen, the most frustrating part was definitely dealing with the police. Everyone else was very supportive and kept trying to help and make sure we were ok which I appreciated a lot. Suchana and I were mostly just happy our passports were not stolen. Something like this could have happened anywhere as well, so I just focused on enjoying my last few days at GK and now this trip around Malaysia.

Saying bye was harder than I like to admit, but now I have people happy to host me all around the world and hopefully many people that will come visit me in Illinois, as well as a home away from home in the Philippines to return to. I can’t express how much I’ve enjoyed this experience. Things didn’t always go as planned and I definitely had to learn to adapt and to deal with “Filipino time” but I think these are great takeaways. Most importantly, I learned about the GK spirit, the importance of community, the positive mindset of the Filipinos, the power of presence, and the significance of one of my favorite Filipino phrases: “Walang Iwanan” – or no one left behind.